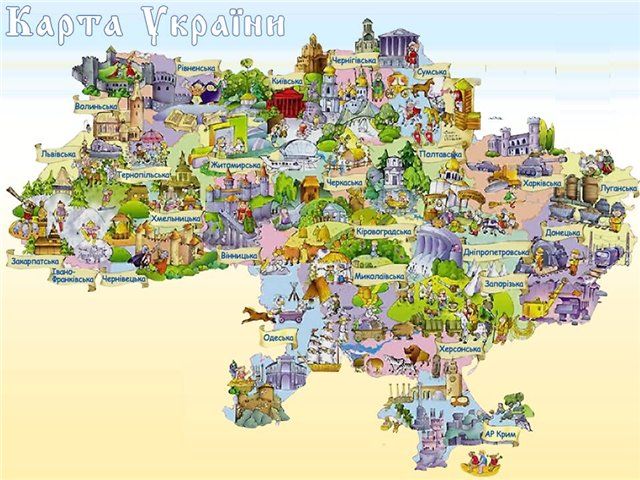 In this publication we got together a tourist cheat sheet of the most interesting and the most popular places in Ukraine and devided them into several categories: cities, nature wonders, historic places, beaches, thermal resorts, ski resorts, unsual attractions, museums and 7 Wonders of Ukraine. You can get some ideas for your short weekend or a longer vacation from this cheat sheet. Stay tuned! It’s gonna be very interesting!

Kyiv is the capital, cultural, historic and religious centre of Ukraine and one of the most ancient cities in Europe, was founded at least 1500 years ago. There are tourist sights, included in UNESCO World Heritage: Kyiv Pechersk Lavra, St. Sophia Cathedral that have almost 1000-year-history and it’s incredible. Kyiv is also the greenest cities in Europe. 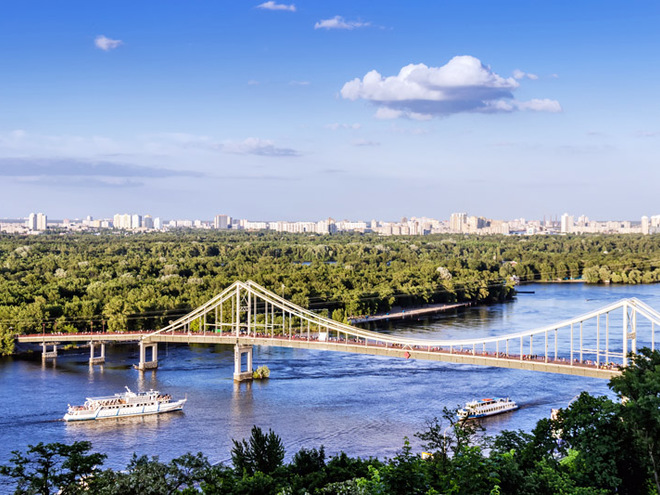 Lviv is a gastronomic capital of Ukraine. Here is a huge variety of restaurants, cafes and bars. And every place has its own conception with a special vibe that is the main point for visitors.

Odesa is a resort capital of Ukraine with its sandy beaches and the largest commercial seaport in the country. A good opportunity to combine beach and educational holidays. 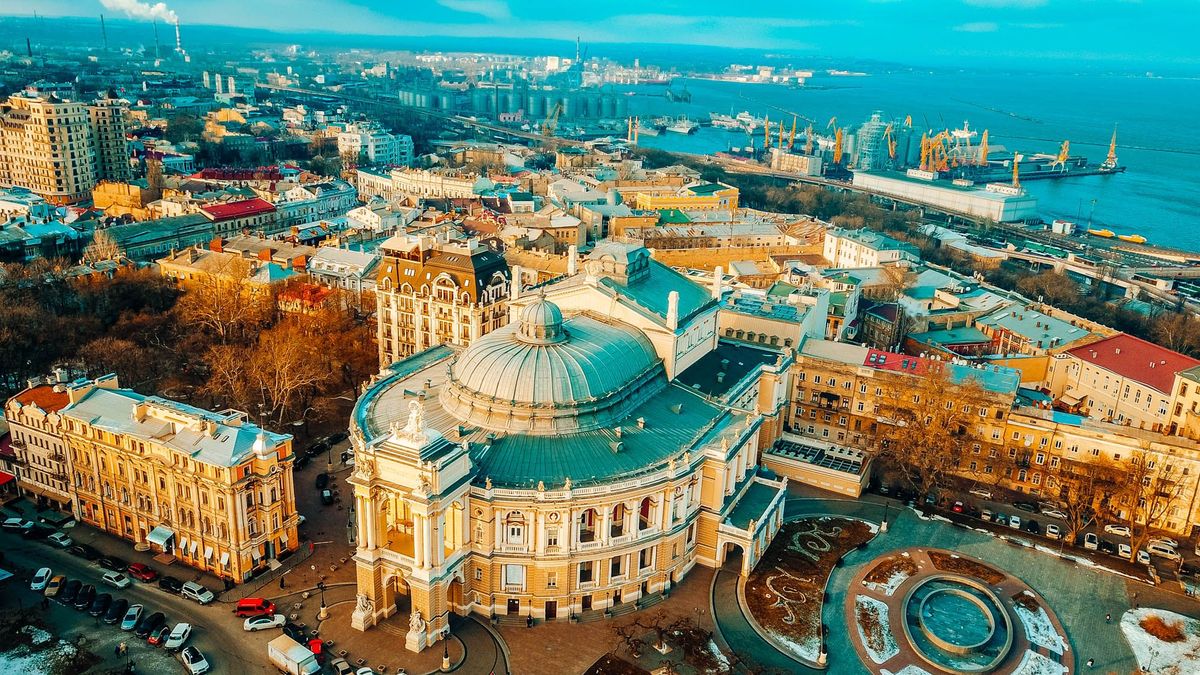 Askania-Nova Nature Reserve in Kherson Region. Ukrainian safari, where you can see how wild animals live in the natural steppe area. There are a large zoo, arboretum, botanical garden and the possibility of a safari trip (but this must be agreed in advance – before arrival).

The deserted island of Dzharylgach with a sandy beach and crystal clear sea. The island can be reached by boat from the resort of Skadovsk. There is also an ancient lighthouse on Dzharylgach, built by a student of Gustave Eiffel himself (creator of the famous Eiffel Tower).

Genichesky pink salt lake with incredible cosmic landscapes in the Kherson region, at the beginning of the Arabat spit. If you visit the lake in the summer, you should come in the morning, when it is not very hot, because the huge concentration of salt makes this area extremely hot. Solotvyno salt lake in Zakarpattya region has unique healing properties that can be compared to the Dead Sea.

Mount Hoverla, located both in Zakarpattya and Ivano-Frankivsk region, is the highest peak in Ukraine (2061 m), which every Ukrainian should climb at least once. Incredible emotions and fabulous landscapes around the mount. It is more comfortable to climb in late summer, when it’s not rainy and it’s not so hot. More details about this place we wrote in this publication.

Guk Waterfall is a picturesque waterfall in Ivano-Frankivsk region, 20 km from the Bukovel resort. It is worth visiting in the spring, when due to the meltwater the waterfall is gaining its largest scale. Visiting the waterfall can be combined with climbing the nearby Khomiak Mountain.
More about this place we wrote in this publication.

Crystal Cave in Ternopil region is about 23 km long. The name “Crystal” cave was given due to the gypsum crystals of white, cream and pink-amber color that covers its walls. Synevyr lake in Zakarpattya region surrounded by the Carpathian Mountains. The lake has a mysterious legend.

Korostyshiv Canyon is a flooded granite quarry in the Zhytomyr region. The landscape around the canyon is very beautiful: pine trees and birches are mirroring in the water. The height of the rocks reaches 10 meters, and the depth of the artificial lake – 20 m. People often come here on vacation with tents to swim in a deep canyon and have a picnic. 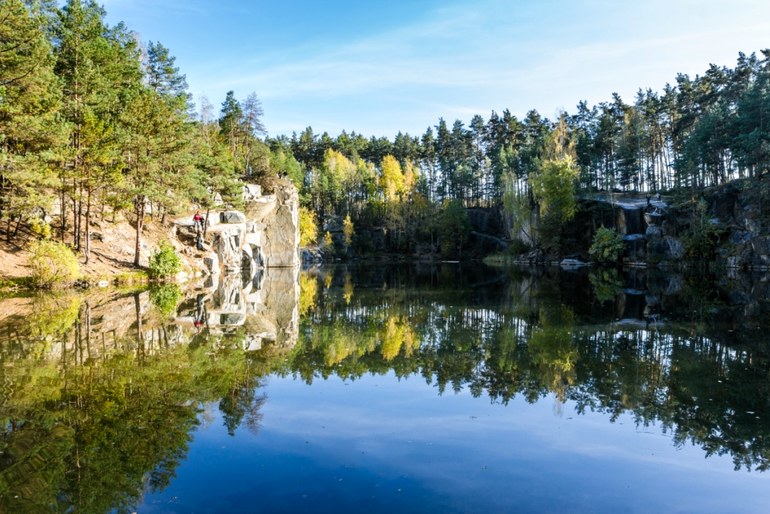 Oleshkiv sands in Kherson region – the largest desert in Europe. There are2.5 km long hiking marked eco-trails here. Interesting leisure in this location. 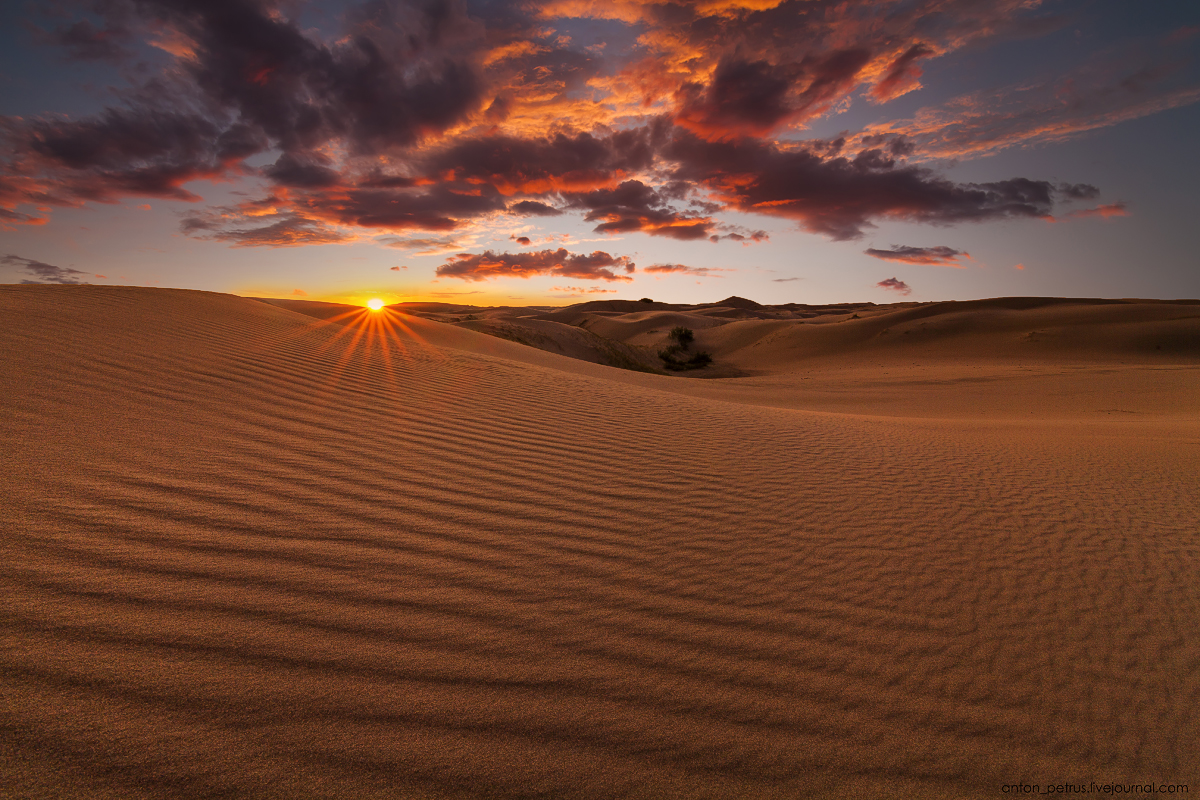 Zatoka in Odesa region. The main feature of this resort is a large 50 meter-wide and 5 km-long sand beach. Shallow water made Zatoka one of the most popular family vacation spots.

Skadovsk in Kherson region. It is a cozy, small town with a shallow sand beach which is good for family vacations with small children. You can go to the amusement park with various attractions along the waterfront in the evening.

Berdiansk in Zaporizhzhia region on the Azov seashore. The best beaches are located on the 18-km long Berdiansk sand spit. 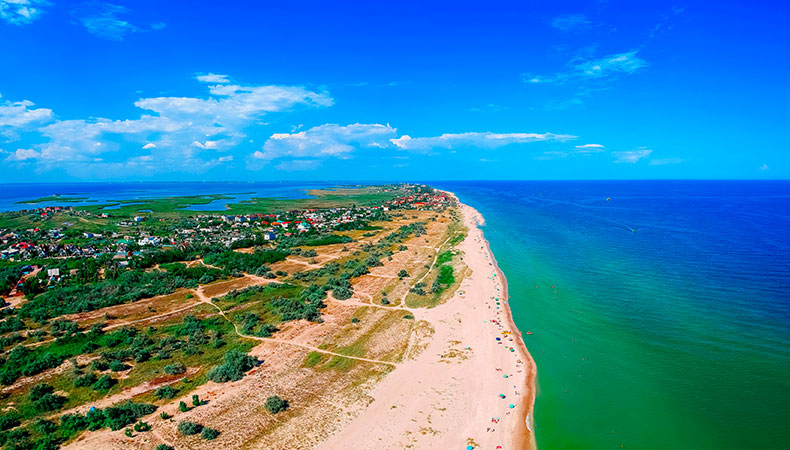 Kosyno in Zakarpattya region is a modern thermal and health resort. There are thermal and freshwater pools, saunas, restaurant, bars, and a hotel on the territory of the resort.
More about this place we wrote in this publication.

Beregovo in Zakarpattya region. There are several thermal resorts in Beregovo.”Zhayvoronok” is the best equipped and the most comfortable thermal hotel resort with its own thermal pools.

Latorytsia in Zakarpattya region. Large open-air thermal pool on the banks of the Latorytsia river. 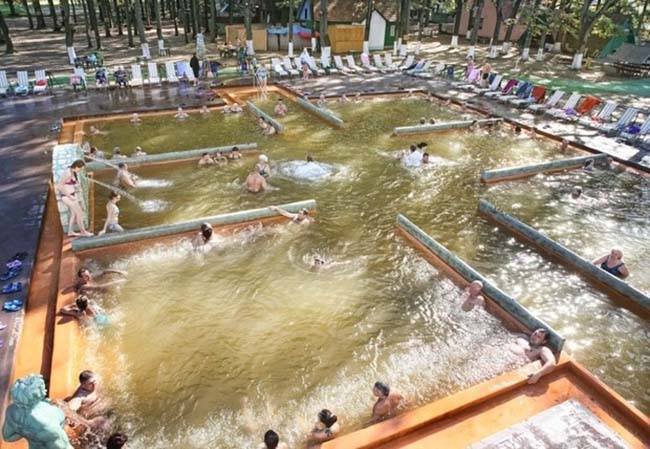 Veliatyno in Zakarpattya region. One of the most popular thermal resorts in Ukraine – “Warm Waters”, which is surrounded by mountain landscapes. There are thermal baths, swimming pools, saunas, salt room and everything you need for interesting leisure, both for children and adults.

Goriachyi Kluch near Zaliznyi Port beach resort in Kherson region. The infrastructure of this thermal geyser is much more modest than the previous ones and the road to this place is rather bad, but it is quite unusual and bright place to visit at least once. And they say that the thermal waters of this geyser have healing properties.

Bukovel in Ivano-Frankivsk region is the largest and the most popular ski resort in Ukraine with the best developed ski infrastructure.  Over 70 km ski slopes of all levels. 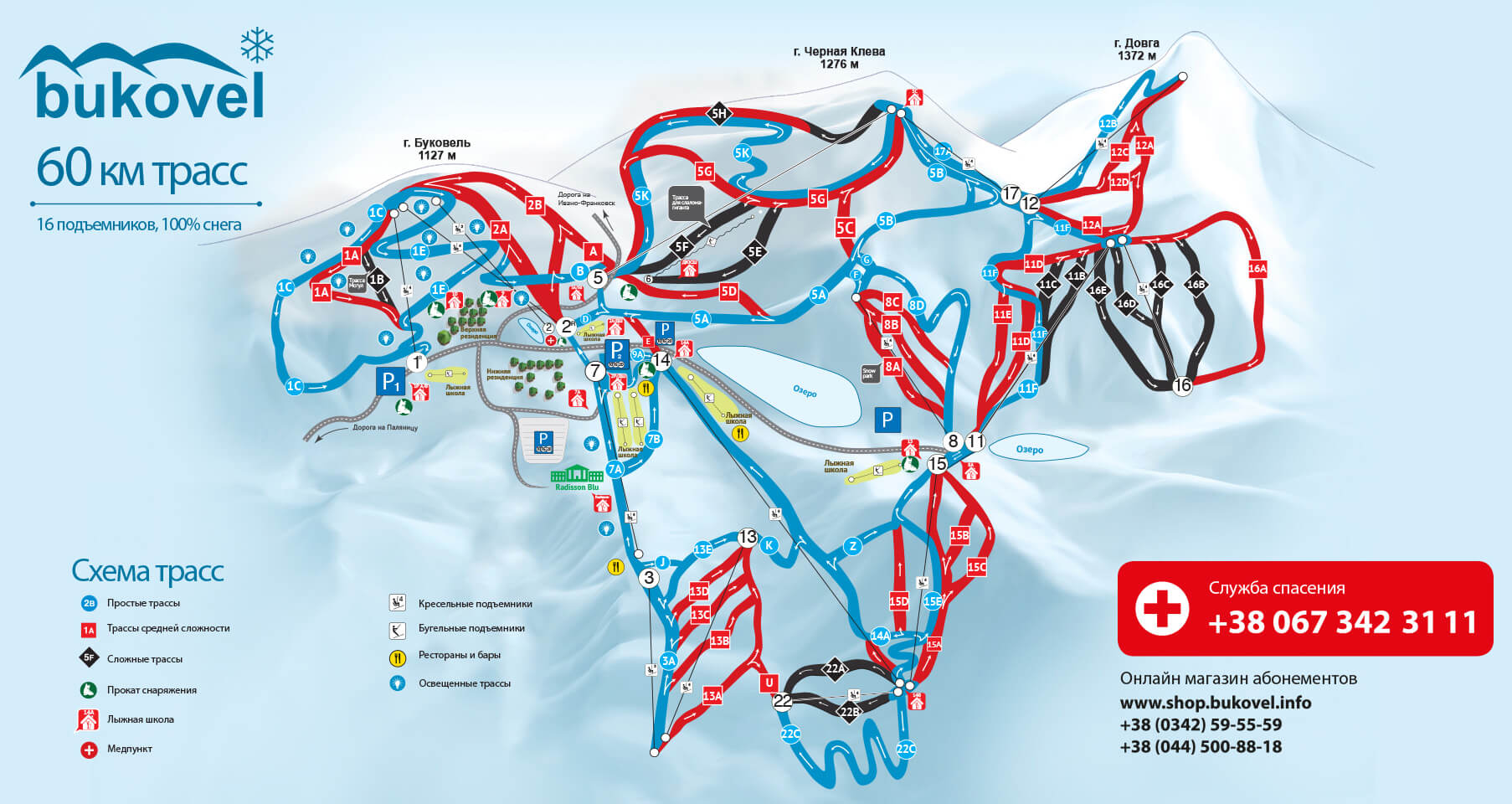 Dragobrat in Zakarpattya region is the highest ski resort in Ukraine, so snow stays here much longer comparing with other ski resorts in the country and the ski season lasts longer. Take a note that there is a bad road to this ski resort and you need a strong all-wheel drive vehicle to get to Dragobrat ski resort base.

Slavske in Lviv region is a village, where you can get by train. There are several ski zones around Slavske village. Every ski zone has its own ski infrastructure (ski lifts, hotels, ski slopes etc.) The main ski zones are: Vysokyi Verkh, Trostian, Pogar, Kremin (or Politech), Menchil, Zakhar Berkut.

Vodianyky ski resort in Cherkasy region. The ski resort has all the necessary ski infrastructure. The length of the slopes – about 2 km.

Protasiv Yar – ski slopes in the very centre of Kyiv with ski lifts, ski school, ski rental. It is a good place to learn skiing. The length of the slopes – about 1 km. 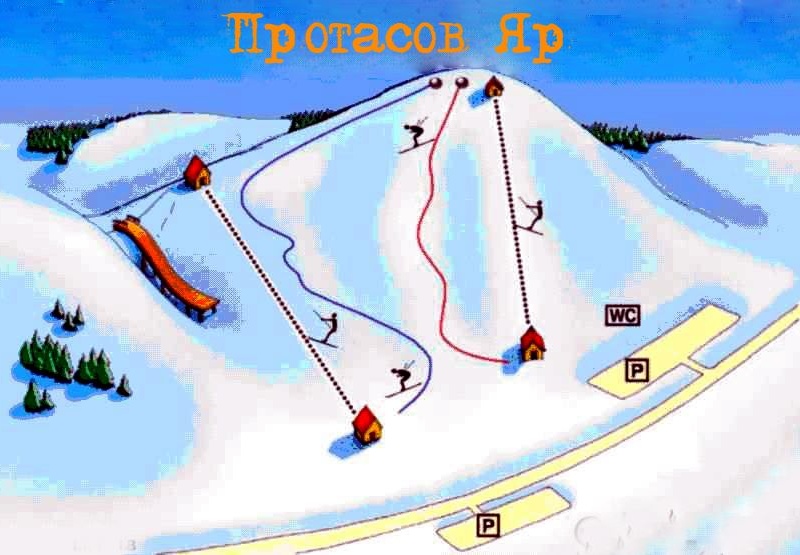 Tourist Carpathian narrow-gauge panoramic tram in Vygoda village of Ivano-Frankivsk region. During the trip by the tram with the accomponying of the excursion and live Folk Music you will see picturesque landscapes, pure springs and mountain waterfalls. There are two variants of railway routs: for half day (classical route) and for the full day (Mountain route). There is a modern interactive railway museum not far from the departure station.

Planetarium in Kyiv is the oldest and the largest planetarium in Ukraine. The planetarium shows modern full-dome films in 360-degree format, informative video lectures on space topic.

Lifting to the Motherland Statue in Kyiv – the highest monumental sculpture in Europe. You can observe amazing views to the city from the height of the statue. We recommend to check the possibility of lifting in advance.

Helicopter excursion above the Kyiv city. During such excursion you can notice all the main beauties of Kyiv. 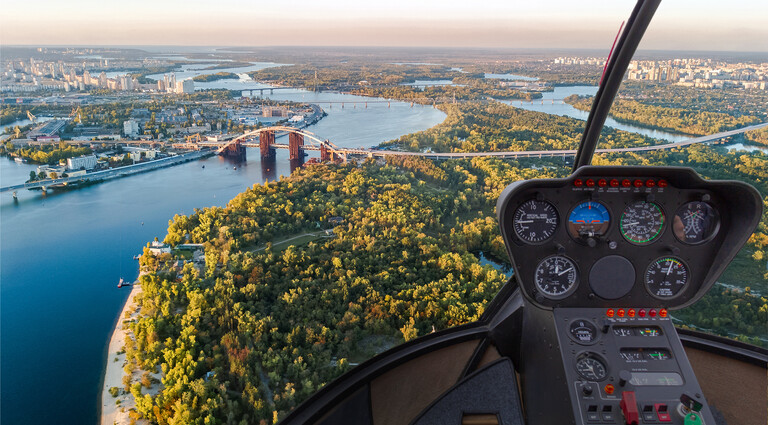 Museum of Cosmonautics in Zhytomyr contains a unique collection of samples of space technologies, astronaut equipment as well as photos, documents and souvenirs on space topic. 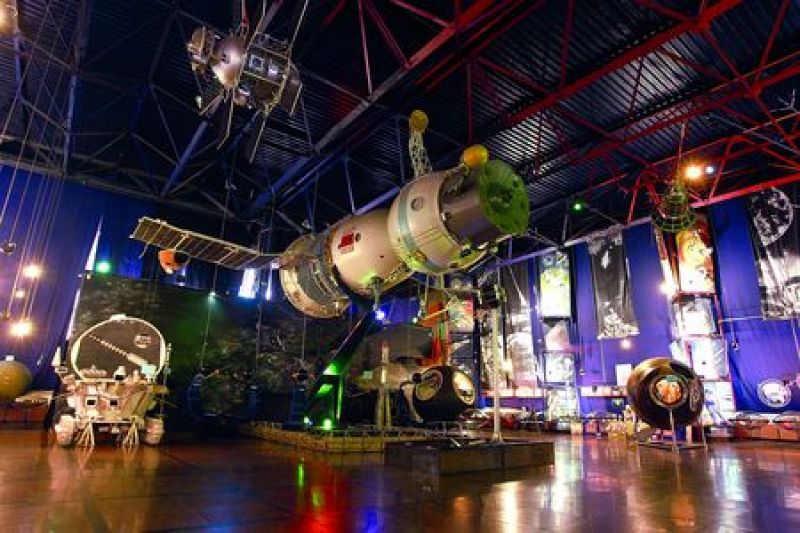 Pysanka Museum  is the only museum of pysanka or pysanka painting museum in the world. It is located in Kolomyia, Ivano-Frankivsk region. The collection of the  museum includes more than 12 000 pysankas and  decorative eggs from different regions of Ukraine and the world.

Odesa catacombs is the network of underground trails and labyrinths under Odesa. Most of the catacombs were stone quarries, where building stones were extracted. The total length of Odesa catacombs is estimated at about 2 500 km.

Taras Hill (or Chernecha Gora) in Kaniv, Cherkasy region is a burial place of the Ukrainian poet Taras Hryhorovych Shevchenko. The stairs to the mountain with 392 steps lead to the very top, to the monument of the poet. There are rest areas on the stairs. There is a square in front of Shevchenko’s grave and a museum on the hill. You can observe a marvelous view of the Dnieper River from this hill. 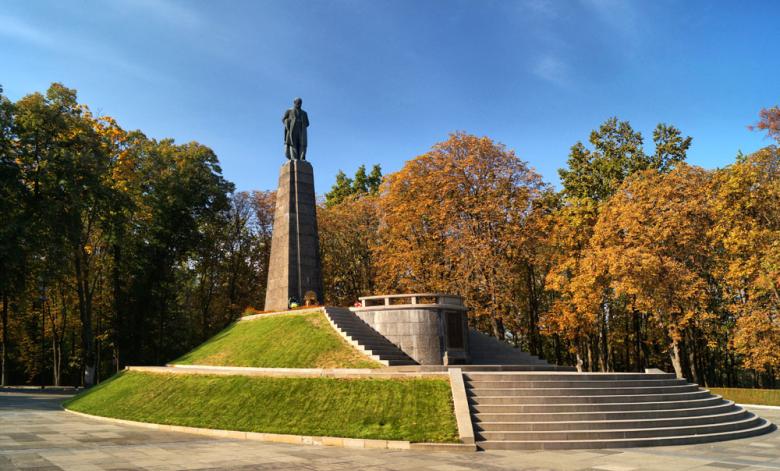 View from the hill

Pyrohovo open-air museum in Kyiv is a museum of architecture and life of all regions in Ukraine. There are about 300 monuments of folk architecture of the XVI-XX centuries: houses, barns, wells and other attributes of the ancient Ukrainian village on the territory of the open-air museum today. 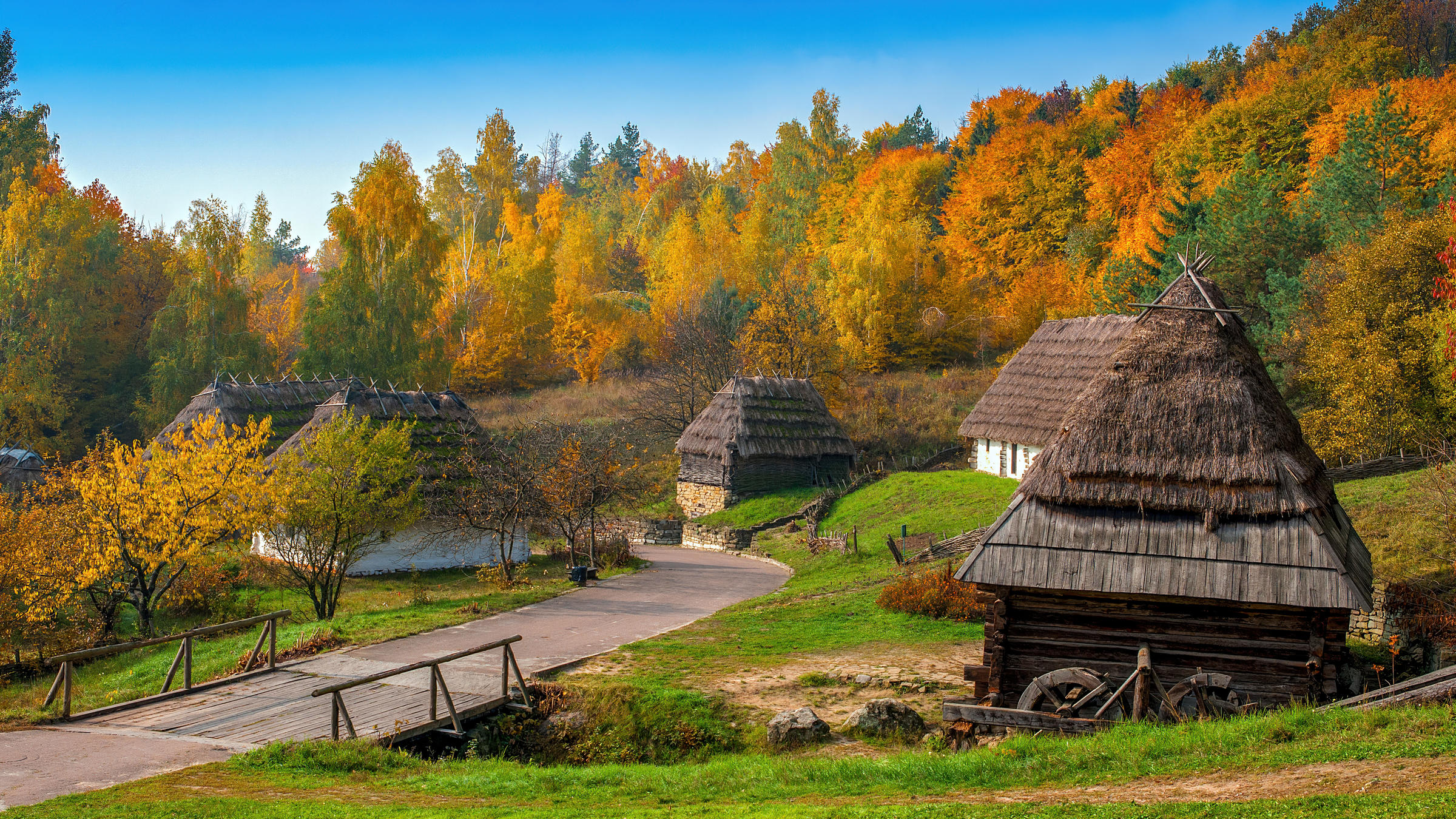 Kamyanets-Podilsky fortress in Khmelnytsky region.  The Smotrych river flows through this canyon, which surrounds the island with the fortress. The bridge over the canyon connects the fortress with the city. Music festivals are often held on the territory of the fortress.

Khotyn fortress near Kamianets-Podilskyi, but in Chernivtsi region. A medieval fortified castle in Khotyn. The fortifications guarded a large crossing on the Dniester river, protected the local population and kept the raids of invaders.

Kyiv Pechersk Lavra is an Orthodox monastery in Kyiv, one of the largest monasteries in the world. It is a complex of churches, several museums, caves, fraternal buildings, hotel, dining room and many other buildings.

St. Sophia Cathedral in the center of Kyiv is the oldest Christian church of the second decade of the 11th century. (1011-1018), one of the few surviving buildings of Kievan Rus. It houses the world’s most complete ensemble of original mosaics and frescoes of the XI century. They are true masterpieces of world art.

Khortytsia island in Zaporizhzhia is the cradle of the Ukrainian Cossacks, the spirit of the Ukrainian independence and courage. The most interesting place here is an open-air museum, where you can see how the Cossacks lived. Sophia Arboretum in Uman with beautiful landscapes, picturesque ponds (lakes, streams and grottoes) surrounded by sculptures of heroes from the myths of ancient Greece. It is especially beautiful here in the spring, when the flowers begin to bloom.

The National Preserve of Tauric Chersonesus – an ancient Byzantine city-state in the Crimea peninsula in Sevastopol.

Write a comment, what places have you already visited, what places would you like to visit and maybe you would like to add more places, which we didn’t mention in our TOP.